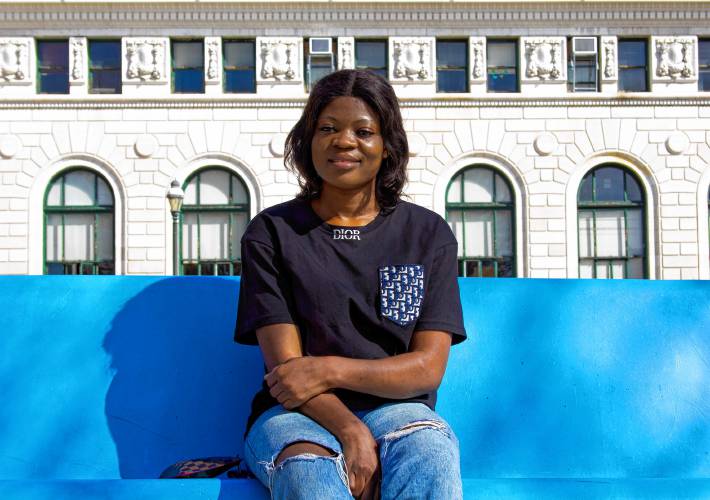 Clarice Madiya, a native of the Democratic Republic of Congo, moved to Springfield in 2015 after successfully applying for asylum in order to escape political persecution and violence. (MEI SEVA photo)

AMHERST — Twirling the last piece of twine into a knot and anchoring it to a tree on the North Commons, Mei Seva exhaled heavily as she looked over her photography installation.

“It’s pretty gratifying,” said Seva on Saturday morning at the outdoor pop-up show. “Whether people walk over knowing that this is here or if they pass by it by chance, there’s a need for this to be in the public eye.”

Her show, “To Begin Anew,” featured photographs of five former refugees who have resettled in communities throughout western Massachusetts and have become American citizens. Alongside Seva’s photographs are individual stories, detailing each woman’s harrowing journey from their home countries of Democratic Republic of Congo, Somalia and Syria to the U.S.

Seva, a Hampshire College graduate, was born in Albania in 1996 in the middle of a civil war, caused by the failure of several pyramid schemes. The economic tensions from the war led to her mother applying to a visa lottery system, which allowed them to immigrate to the U.S. She moved from the Balkan country in 2002 when she was 6 years old.

“I think a lot of my own experiences helped me want to bring more understanding,” she said. “I will also say, my experiences are not comparable from people I spoke with.”

For Seva, the purpose of the project was to shed light on the realities in developing nations where people are constantly faced with struggles from war, lack of financial opportunities and famine as well as the risk of persecution from their home governments.

Over the past few months, Seva interviewed the former refugees, and photographed them in a way that she felt communicates each person’s essence and personality, but also puts a face to these complex issues.

Among those featured in her exhibition was Masemo Rudima, who grew up in the Democratic Republic of Congo. In Seva’s interview, Rudima explained that as a child, she would often “hear gunfire and run and hide under the bed.”

For many in her area, it wasn’t uncommon for families to spend the majority of their days outside and dash inside when it was time to take cover.

“Militants from both sides of the conflict would show up and masacre entire families, destroy houses, steal and commit other atrocities,” Seva wrote as part of her exhibition. “‘If they came inside [your house], your life would be over,’ Masemo tells me.”

Rudima and her family struggled to make money and have enough food to eat because of the war, so when she was 27 years old, she left her parents behind and fled to Nairobi, Kenya, with her two children and her 15-year-old sister.

A nonprofit in Kenya assisted her in applying for refugee status, and six years later, in November 2015, Rudima and her family moved to Springfield.

The stories did resonate with at least one passer-by on Saturday. Looking over Seva’s shoulder as she clipped one of the photographs to the line, Easthampton resident Meliha Topic touched her side.

“Me too,” Topic said to Seva. “I was a refugee from Bosnia.”

The area of her body she touched is where a piece of shrapnel is still embedded after a sniper fired in front of her home in Sarajevo in May 1992.

“It changed my life,” she recalled.

In June of that same year, she and her family had no water and did what they could after their refrigerator grew bare. Many times as she walked to work as a bookkeeper, she was told by law enforcement that she couldn’t continue because soldiers were “shooting and firing grenades.”

By November, Topic and her son fled to the Czech Republic and applied for refugee status. Four years later, they moved to Amherst. She became a U.S. citizen in 2005.

“We left everything. … but I found a better life. I found a good life here. I found my home here. I’m glad I came to the United States. It’s the best life for me and my son,” she said.

Funding for Seva’s exhibit was provided by the Amherst Arts Council and was organized in collaboration with the Jewish Family Service of Western Massachusetts. The Springfield social services agency provides services for immigrants, refugees and senior citizens, including citizenship and resettlement programs for refugees, according Lori Friedman, marketing and development coordinator for the organization.

When Seva originally reached out to the Jewish Family Service for assistance on her project, Friedman said, she was interested in speaking with some of the Afghan evacuees who have resettled in Massachusetts. However, Friedman said the agency felt that many of the evacuees were still very new in their journey, whereas the women Seva interviewed were resettled and much further along in their journeys.

“We know that people want to hear the stories of these evacuees and refugees, but we also need to respect people’s privacy and not have them or their stories exploited,” said Friedman. “We’re thrilled for (Seva’s exhibit). These clients have gone through citizenship programs and it’s a very wonderful and empowering thing.”

Seva said that although this region tends to be known for its more liberal attitudes, it is still a predominantly white part of the country where people lack exposure to diverse cultures and people. She hopes that the project will help area residents understand the hardships many refugees and immigrants face in their home countries and be more welcoming to these communities.

“Anti-immigrant rhetoric remains a dominant theme in U.S. politics following Trump’s presidency. That’s why it’s more important than ever to build empathy, community, and awareness of the lives of refugees,” she said.

While Seva’s outdoor installation was only set up for the day in Amherst, the show is also heading to Northampton. On Aug. 6 and 7, her photography will be installed at Pulaski Park in Northampton.
For more information on Seva, visit meiseva.com or on Instagram @meiswanderings.
Emily Thurlow can be reached at ethurlow@gazettenet.com.